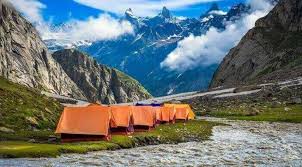 The Indian state of Himachal Pradesh is well known for trekking due to the presence of some of the best trails, valleys, and passes as a result of the great Himalayas. The rawness and remoteness of the many locations in Himachal, away from the vexing city life, make it an attraction for trekkers. Tourists not only from different parts of India but from all across the globe come throughout the year to seek self-salvation through trekking here.

There are many trekking destinations in Himachal Pradesh that trekkers visit like the Hampta Pass, Pin Parvati, Thamsar, Kinner Kailash, and Chandratal to name a few.

Although there are dozens of trekking destinations in Himachal, some are more frequented by trekkers than others. Following is a list of the top treks in Himachal Pradesh that are a must-try for every trekking enthusiast:

The Hampta Pass trek is a 5-day trek to the pass near Hampta village that connects two different valleys: Kullu and Lahaul. It is one of the most popular treks in the state and attracts a large number of trekkers.

The base camp for the trek is at Chika near Jobra. From Chika, you will start hiking towards Balu ka Ghera, between which you will see walking in a narrow valley with waterfalls, flowers, and mountains. The trail is sometimes even sometimes rough but it is ever so delightful with mother nature’s wonders. The trail then takes you to Hampta Pass which is essentially a crossover that takes one to the arid and dry mountains of Lahaul valley. You will then be proceeding to Siaguru or Shea Goru campsite. The next day you will be trekking to Chatru which is an area in the middle of the three passes of Spiti, Hampta, and Rohtang. After launching here, if weather conditions permit, you will be riding to Chandratal lake which is about 70km from here. The lake is worth the ride which is very bumpy and dusty. You will either be camping here at the lake or back at Chatru. From Chatru, you will head back to Jobra and then again to Manali to end your trek.

The Bhrigu Lake trek is a 4-day trek to the sacred glacial lake Bhrigu or Brighu located in the Kullu district of Himachal Pradesh. It is located at an altitude of 14,000ft. The area is covered in snow all throughout the year except for monsoons. According to myths, the lake never completely freezes because it became sacred after Maharishi Bhrigu came to meditate here. It is almost circular in shape and lies like a pit in the middle of snow-capped mountains.

Although a short and easy trek, it is nevertheless adventurous as you stride along trails of different terrains. The trek starts from Manali from where you will be driving to Gulaba and then to Gulaba camp in a short trek of 3km. Gulaba is famous for adventure sports like skiing, paragliding, and snowmobile riding. From Gulaba camp you will leave for Rola Kholi which you will be covering in 6km. Along the way, you will be able to Mt. Hanuman Tibba and Seven sisters speak. From Rola Kholi you will start towards lake Bhrigu but will be back to Rola Kholi again by the end of the day. Today’s trail will be a little tricky but, once you reach the lake, you will be enchanted as it is one good feast for the eyes. The azure-colored water of the lake with reflections of the mountains and sky on its surface is something that can’t be put into words. You will also witness the peaks of mountains: Indrasen, Hanuman Tibba, and Deo Tibba from the lake. The return journey is the same way back as this is a circular trek.

See also  Do I Have To Wear Safety Shoes At Work?

One of the beautiful and easy treks of Himachal Pradesh. Kheerganga is a river that flows in Kasol and gets its name due to its unique foamy nature which looks like the Indian sweet “kheer”. It is a 3-day trek which is a cool weekend getaway. Kheerganga is also known for its natural hot springs which are awesome for relieving all that trekking tiredness. Kheerganga trek is usually done with Buni Buni pass by trekkers, unlike regular tourists. So, till Kheerganga, you may find a bit of a crowd after which it gets isolated and adventurous.

You will be starting the trek by driving to Bhuntar which comes just before Kasol and then to the Barshaini campsite. From Barshainin you will be trekking towards Kheerganga for about 5 to 6 hours. After resting at Kheerganga, you will start for the Buni Buni pass which will take about 6 hours to complete. Along the way, you will find green meadows, alpine trees, the mountain peak of Ali Ratni Tibba, and the Buni Buni glacier. After camping at Buni Buni for the night, you will leave for Barshaini the next morning in a relatively easy descent. From Barshainin you will ride back to Bhuntar and return. This trek is very near to the Hampta Pass trek. So, if time permits, you can give it a try as well.

The Pin Parvati pass trek is one of the most popular treks in Himachal Pradesh and it is one of the most challenging treks in all of India. Doing it is a privilege that only seasoned trekkers can afford. Connecting the Pin valley and Parvati valley, this route is any trekker’s ultimate game as it can be covered in 11 days. Given the difficulty, the trek offers some of the exquisite sites of the Himalayas and that is what makes it so revered.

See also  Letter to my Boyfriend Expressing What I Feel

The trek begins from Kaza from where you will be going to the Pin base camp with stops at Mudah, Tiya, and Shia. Then you will be continuing to Mantalai via Pin Parvati pass which alone will take you 12 hours in a single day to complete. After resting at Mantalai for a day, you will be progressing to Odi Thatch then to Tunda Bhuj then to Kheerganga, and then finally to Barshaini to end the trek.

How To Keep Your Braided Wigs Looking Fresh?

Trendy Types Of Jeans For Girls

admin - May 30, 2022
Daily Cheap Post Sir, this is my high quality website. You can publish your articles on it. Publishing articles on this site will benefit your site and will increase your site visitors and purchases. This site is useful for tech and business