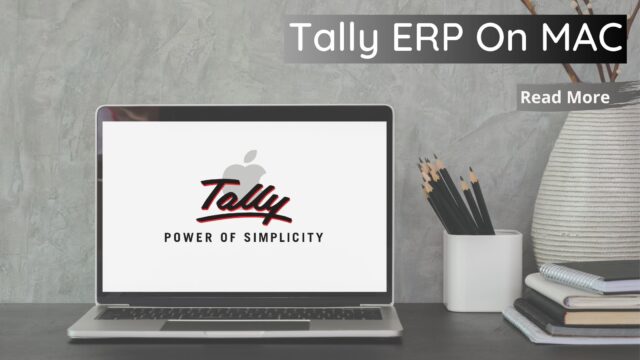 Tally ERP for Mac can be accessed in a number of ways. The Dual Boot technique, Virtualization, Cross-platform tools, and Tally on Cloud are among the tested methods, with Tally on Cloud being the easiest and most effective. Many sources online offer the Tally ERP 9 application for PC. To learn more about Tally ERP 9 for Mac, keep reading.

Is Tally ERP available for Mac?

Is Tally compatible with Mac OS? Unfortunately, there is no Tally for the MacBook. However, there are a few options for running Tally on Mac OS. Which we will address further down.

What are the four different methods for installing Tally on a MacBook?

Besides Dual Booting and Tally on Cloud, virtualization and cross-platform technologies are the other two ways to install Tally ERP software for Mac. You can use any version of Tally software in these ways.

Dual-booting is the process of running two operating systems on a single computer. For example, you can run Windows and Mac OS on the same computer. Boot loader software like boot camp can help you dual boot and install your Mac and Windows. When a partition is built on the Mac hard drive and the Windows operating system is installed, Tally data files are produced. You can download the tally software from this guest window.

V Box and Parallels are applications that help allow you to construct a virtual machine on your Mac in order to download Tally ERP. Installing a Windows operating system within this virtual machine can assist you in using Tally, similar to dual-booting.

Tools like a crossover or winebottler are needed for windows software apps on Mac OS to effortlessly work between the Mac OS platform and Windows and use Tally without complication.

Tally on cloud technology is the most convenient and time-saving option to work from home on Tally online or operate Tally from the office. You can also use Tally on mobile devices. The majority of people believe that Tally on Cloud for Mac is the best option. Tallystack provides you with Cloud-based Accounting Software at a very reasonable price.

You can also watch a video tutorial for Tally on Mac on YouTube. This will help you comprehend all of the procedures better.

Tally On Mac can be accessed in four different ways. But the best approach is to use Tally on Cloud, which allows you to access your tally account from anywhere, at any time, using any computer or device with any operating system. It saves you a lot of time and assures that you have minimum performance lags while using less bandwidth. Tally on Cloud is a time-saving method of managing your Tally ERP 9 account on a Mac. Contact Tallystack for the best Tally on Cloud services with the best features and rates.

Common characteristics of a term paper

Why is the HP printer showing a network connection error?

admin - June 20, 2022
Daily Cheap Post Sir, this is my high quality website. You can publish your articles on it. Publishing articles on this site will benefit your site and will increase your site visitors and purchases. This site is useful for tech and business